Steady-state methods of analysis of single-ring infiltration data are commonly applied but the duration of an infiltrometer experiment is often established quite subjectively under the premise that, generally, infiltration stabilizes rather quickly in the field. For a loam soil, the effect of the duration of a beerkan run on sorptivity, S, and saturated hydraulic conductivity, Ks, was tested by using the BEST (Beerkan Estimation of Soil Transfer parameters)-steady and SSBI (Steady version of the Simplified method based on a Beerkan Infiltration run) methods of data analysis. The standard experiment, based on a total of 15 water volumes each establishing an initial ponding depth of ~0.01 m (on average, 0.32 hours of infiltration), yielded approximately two and >100 times higher S and Ks values, respectively, than a long run (117 water volumes or 8.1 hours). Stabilization was faster for S (approximately in 3 hours) than Ks (6 hours). Similar Ks values were obtained with BEST-steady (192-261 mm/h) and the SSBI method (177-184 mm/h) for the standard run but not for the long-duration run (1.5-2.1 and 20-21 mm/h, respectively). This discrepancy was due to the fact that more information on the infiltration process is used by BEST-steady (total duration, total infiltrated water, steady-state infiltration rate) than the SSBI method (only the latter variable). In conclusion, Ks estimates are very sensitive to the used water volume for the run. The run duration should not only depend on attainment of near steadiness but also on the possibility to capture the soil’s hydraulic behavior in a representative situation for the hydrological process of interest. The possibility to use the hydrodynamic soil properties determined with the tested methodology to simulate rainfall effects on soil structure should be tested in the near future. 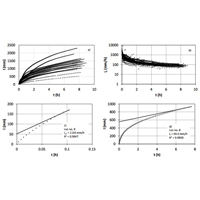 This work is licensed under a Creative Commons Attribution-NonCommercial 4.0 International License.

is the official journal of the Italian Society of Agricultural Engineering and it is published online by PAGEPress®, Pavia, Italy. Registered in Pavia, n. 9/2012. All credits and honors to PKP for their OJS.